It has been said that the greatest part of traveling is coming home.

After my time in Marbella I was home for three days, then off to Raleigh, North Carolina for a production of my play IT IS DONE. Between the various time zone changes and having a four-month-old at home (and a four-year-old) everything was a haze and a blur.

But we had to stay focused. After all, our screening at The Valley Film Festival would be our West Coast Premiere, not to mention our Los Angeles Premiere. The majority of our cast and crew lives in The Valley. Over 75% of our movie was shot within two miles of the festival home base:

Our main apartment location, just a hop skip and a jump from the Laemmle NoHo.

Last year while in post Beau and I attended a seminar on indie film marketing and PR at The Valley Film Fest and I mentioned that this would be a great festival for us. Beau slyly mentioned that a film he produced won the festival’s “10 Degrees Hotter” award for Best Feature nearly a decade ago and thought it was a great place. (“10 Degrees Hotter” because The Valley is always 10 degrees hotter than the rest of Los Angeles.) So we applied. And I sent a personal email lobbying for our movie. And we attended a pre-festival mixer to meet the team. And then, months after we first submitted, we were accepted!

We had to strike while lightning was in the bottle, to completely mix metaphors. All the cast and crew needed to be invited; some of the cast literally NEEDED to be invited since their contracts call for comp tickets to the Los Angeles premiere. Since we are starting our path towards distribution (more on that in another post) we needed to invite distributors to attend the screening. In all likelihood they will want to watch a link from the confines of their offices but on the slim chance they can make it, watching a movie collectively amidst roars of laughter (hope, hope) is the best way.

And there will be an audience! Unlike Marbella, where our second screening had three audience members not affiliated with our movie, we knew we could pack the house, as we promised the fest. And we backed it up: we quickly sold out the 130 seat venue and were moved into the big room which seats 250. We threw a pre party for the cast, crew, investors and friends and then made our way to the theater. And the crowds were waiting…

Even though it was a 10pm screening time (actually, after two shorts our movie wouldn’t start until 10:30 but we didn’t tell our audience that part) the crowds were eager and excited, exactly what you want from an audience.

A few moments to pose on the red carpet… 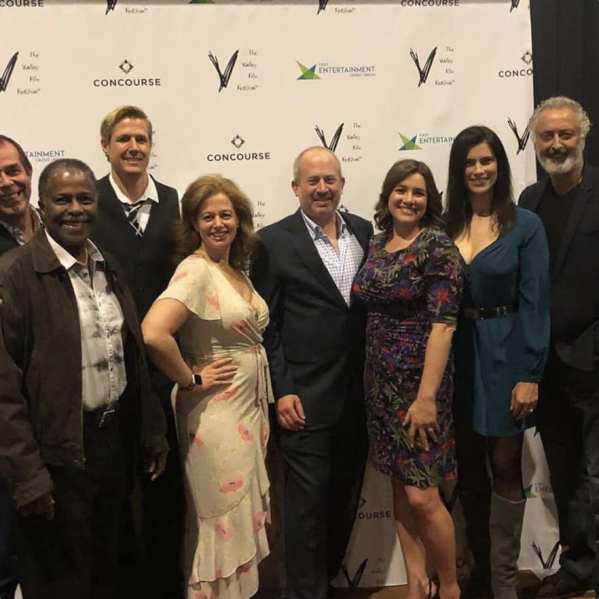 The audience was with us every step of the way: the laughs, the gasps (“did she just slap her?!?”) and the important lean ins when the plot twists happen. After the credits and the applause died down we did a brief Q and A, which I honestly can’t remember as it was after midnight and all I could think about was our five month old who would be awake for the day in less than six hours. And then our L.A. premiere was over!

But it wasn’t all over. Another joy of a festival 10 minutes from home is being able to pop in and see movies whenever I could, and with family in town to help with the kids, I took advantage. The quality of films was excellent. I saw compelling features and shorts that were as thought-provoking and entertaining as our movie; we were clearly in great company.

On closing night Beau, Catia and I went to the festival wrap party. Over free wine, beer and pizza we chatted with other filmmakers and awaited the awards. With such a high quality of movies I had no expectations to win the big prize. But then…

…shocked! I remembered to thank everyone at the festival; at least, everyone who’s name I remembered. You can check out us winning the award here (jump to the 13 minute mark if you don’t want to watch all the awards).

Fleeting thought: this is our second time winning Best Feature Film at a festival. Maybe we’re on to something?

And speaking of seconds, congrats to Beau for producing two different features to win the top award at this festival! Future filmmakers: want to win Valley Fest? Go to Beau!

After the awards, another drink, a quick handshake and meeting with one of the festival sponsors who happens to be a distributor (stay tuned) and then the brief 10 minute drive home.

Our fourth film festival concludes, and while travel has been a lot of fun it is a thrill to be on the home team for this one.

Coming up next – Festival #5: Austin Indie Fest, and the road to distribution.