Closure is in the can (or on the drive to be more 21st Century) and editing has begun.  I have recapped each day of shooting, most recently Day 9: Hell Day. Next up, the hardest day of the shoot.

Even though our first location of the day was on a picturesque tree-lined street in a glorious block in Burbank, everyone looked a little shell-shocked. Sure, one could say it was showing up for 10 of the last 11 days, but we all knew that the day before was brutal, and not everyone survived. To add to the stress, our replacement sound guy was running late, and would likely be up to an hour late. AND, he was replacing two guys, so he would be doing both the mixing and the boom operating. A great start.

The crew looked like they were going through the motions, and they probably were. But there was something deeper going on; most troubling, Paul our First A.D. and Senda the D.P. weren’t talking to each other. Normally they have to communicate frequently to keep on schedule, but they were barely acknowledging the others existence.

I could have said something. I should have. But I couldn’t massage egos at this point. I needed to stay focused on the script. 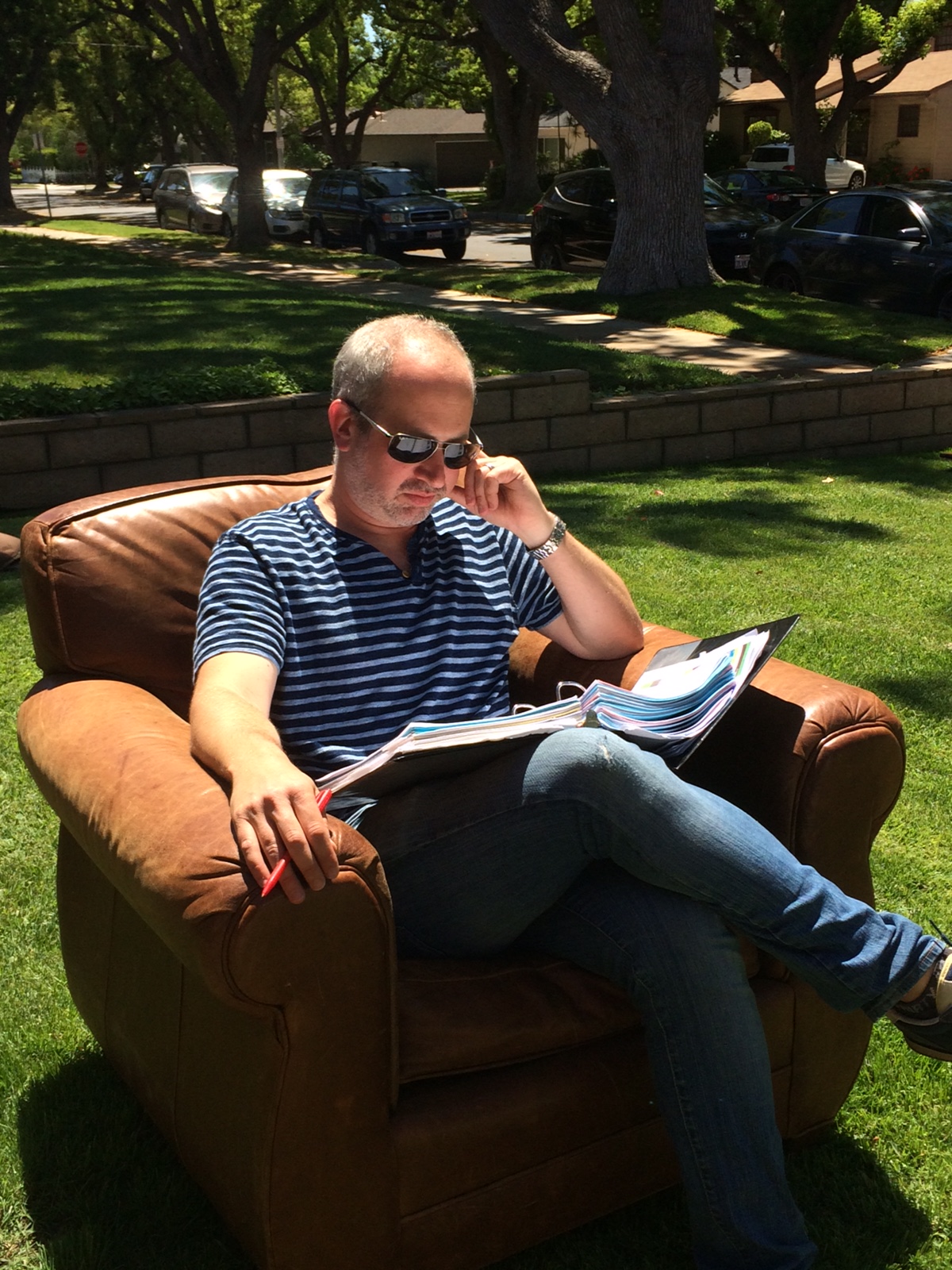 Just because I’m sitting in a comfy chair on the lawn doesn’t mean I’m not working. Note the red pen: still making cuts on the third to last day.

Tonight we were shooting our big fight scene and I was still not confident in how we were going to pull it off. Sure, I got a sex choreographer on board, but I naively thought my theatrical fight experience was enough to cover. As I reviewed my notes, I wasn’t sure I was qualified enough.

But that was still hours away. First, a house in Burbank. This time, we waited for the Fire Marshall to show up before we started shooting so everything would be on the level. We got the shots off all right, but there was a definite gloom in the air. Catia and James Walsh as Detective Franklin were giving great performances, but it was a struggle for the rest of us. Senda looked like all the energy was gone. Even her ready for action call (which I still haven’t figured out what she is saying!) was low.

Of course, the struggle led to a slow down which meant we were once again behind schedule. We needed to have a company move to our abandoned apartment complex location, find a location for our parked car scene and shoot it before we broke for dinner.  That way we could spend the entire time after dinner working on the fight sequence.

Senda and I raced ahead and found a location where the light was kindest. The crew and actors arrived, and we quickly got into place. If we could magically pull off two setups of a two page long scene in 40 minutes, we would be back on schedule.

We did it in 25 minutes. James and Catia were brilliant. The photography was great. Even our new sound guy said everything sounded perfect. We actually broke for lunch early.

The camera team (Brie, Senda and Joey) is ready for action.

We did a take of our actors approaching the fence. Officer Franklin pretends to unlock the padlock and remove the chain, which can easily be faked as we are far away and he’s blocking it. Then he and Nina walk into the gloriously decrepit abandoned apartment complex we had rented. The take went well, but now the light was perfect and we needed to do it again. And then, a production disaster: on the walkie we heard the P.A. from across the street say “hey, who has the key to this lock?”

Yep. The P.A. locked the padlock. Totally unnecessary. There was one key. And that key was with our location manager Sean, who had left us for a few hours to work his other job, backstage at a theater. During a play. With his phone off.

Of course we should have kept the key. And of course we should never have locked the lock. But we did. And here we are, with the cast and 1/3 of the crew outside the locked property, and the rest of the crew locked in the property. Rather than explode in front of the crew (which would have done nothing) I went around the corner, cursed and punched things. It felt better, but didn’t solve anything. Someone ran out and bought bolt cutters and we were back in business, but we lost 45 minutes in the process. And the clock was ticking.

The fight scene was meticulously planned, but it involved many different shots. Each shot that took minutes longer than normal set us back even further. We blew our power generators, but bribed nearby neighbors to utilize their power. Tick, tick, tick.

Staging the actual violence took time, and adjustments had to be made. Tick, tick, tick. Beau glared from the corner, reminding me that we need to wrap up immediately. I was wracked with regret. I should have had a fight choreographer; while I had experience I wasn’t completely versed in how to get what I wanted to achieve. Our costume designer Jen doubled as our actors’ safety monitor, and that helped, but we just didn’t have enough people (stunt people might have helped) and time. Tick, tick, tick.

Got the last shot at the 12 hour mark. How did it all look? Absolutely no idea. It felt rushed and at times, crappy. To top it off after we raced to wrap I congratulated the crew but left my lead actress, who did all the heavy lifting, standing alone, shell shocked from the trauma of being beaten up and thrown around for the past few hours. Not checking in with her made me both a bad director and a bad husband.

After wrap, I drove home our exhausted and justifiably angry actress. We made our day, but it took its toll. Two more to go, but I don’t know if I can take another one like today.

Making a movie is VERY difficult.

Coming up next: back at home base, and saying goodbye to all but one of our actors.