This week Catia and I went to dinner with our friend James. It was one of his last nights in town for a few months, so for his last supper, so to speak, he picked the venerable institution, The Musso and Frank Grill.

Musso and Frank’s has a rich history. I am quickly learning that anything over a few decades old in Hollywood is considered a classic, so to dine at Hollywood’s oldest eatery, around since 1919, is the SoCal equivalent of walking the Colosseum in Rome. And it does have a rich history: Orson Welles regularly held court here, as did F. Scott Fitzgerald, Raymond Chandler, Ernest Hemingway, and Charles Bukowski (although presumably not at the same time…that would have been a perfect storm of neuroses and alcoholism). Alas, while still an institution, the place has faded a bit (but the prices are VERY contemporary). I’m sure in its heyday it was packed, but on a weeknight the place sort of looked like the bar in The Shining. No starlets or writers holding court, but there were a couple of reality stars tossing back martinis and shrimp cocktail: 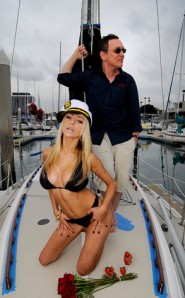 Over the meal James was mentioning reading a script recently, and how he was bored from the beginning, which got me thinking about my own script. Is it interesting? Does it jump out at you from the beginning? There needs to be set up, sure, but all good writing captivates you from page one and never lets up. But there is a fine line: this does not give permission to throw in bells and whistles on every page. Constant overstimulation is a bad thing…unless you are the gentleman in the above picture, presumably.

Keep it interesting. And not just to me.

While we were wrapping up our meal, and the reality stars were giggling themselves out the back door (they really did seem very much in love), I noticed the only other active table. Two gentlemen at a four top, having a very heated conversation.

And they were deaf.

Hands flying. Faces expressive. And not something you see every day (unless you are actively involved in the deaf community of course).

I have two supporting characters, both imposing figures, who have a few scenes together. Their relationship needs to be dynamic in some way. What if one of them was deaf? There is no reason not to make it happen. Do I know sign? My signing knowledge is limited to “you crazy dancing helicopter” but that’s not important. Write it, and someone can help me make it happen down the road.

Keep it interesting. Life should occasionally have some crazy dancing helicopters.

And maybe I can cast that couple in the roles.