Another week, another few pages. 55 pages into the rough draft, and so far I’m happy with where it’s going. I don’t worry about page length with the first draft, but I’d guess I’m about halfway finished.

It’s that time of the year again, the Super Bowl of the entertainment industry. The Oscars aired a few days ago, and like always I look forward to it, then a few hours in get bored and wonder what I was anticipating. My wife and I attended a party. Good food, good friends, and like all good sporting events, there was a betting pool. Last year, despite my extensive knowledge of movies and the business, I came in 17th place.  There weren’t even 17 people at the party, which means I lost to people who literally phoned it in. This year I did a little more research and vowed to do better. 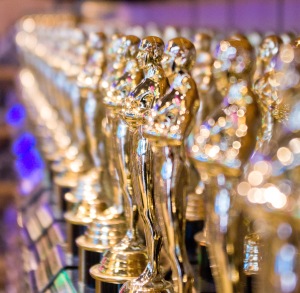 Say what you will about the silliness of everything, with who’s wearing what and what jokes tanked and who got ripped off and who shouldn’t have been nominated (and which 9-year-old got called the c-word!), not to mention the whole concept that one can beat other people for an award for something as abstract as artistic accomplishment is tough to fathom, but it is still exciting to watch people at this place in their journey, both with their careers and with a particular project. That said, I would be lying if winning an Academy Award didn’t cross my mind on occasion when writing a script.

Honestly though, visions of tuxedos, red carpets and front row Jack Nicholsons have not been swimming through my head while writing this script. Not that I wouldn’t want to touch that gold ring, but at this point in the script I don’t care. I’m writing this script because I want to make this movie. Plain and simple. I want to make it for me, for fellow artists and collaborators who are underworked, and hopefully for an audience that will appreciate the story I want to tell. To me, winning is getting the movie made. Winning is completing the script. Winning is writing this blog entry.

I’m a writer, and I’m doing what I should be doing. The more I write, the better I get. And the same goes with Oscar prognostication: this year I came in 4th place.